ADMISSION: Gain Admission into 200 Level In Any University Of Your Choice Through IJMB/JUPEB. NO JAMB | LOW FEES. Call/Whatsapp 08109881054 NOW! 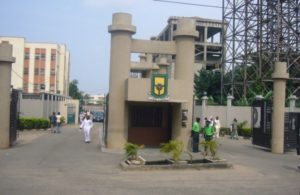 (ASUP) on Thursday began an indefinite strike over unpaid allowances by the college management.

wind as they have issued the college management 24-hour ultimatum to meet their demand.

Following the indefinite strike, thousands of students were neglected in the classrooms as lecturers refused to go attend to

weekend for the part-time students.

On Wednesday, students of the institution protested against the closure of the hostels by the management with exams less

than four weeks forcing the college management to agree to open it before the commencement of their examination.

ASUP after congress and the expiration of the 24-hours ultimatum. The two unions said its members would start the strike on

Monday if the college management failed to refund the money deducted from July salary.

According to report on Thursday, the college staffers were outside in groups discussing the indefinite strike, while the students

watch them and some left for home due to the present situation.

demands and disclosed that the Rector, Dr. Margaret Ladipo could not produce any document to back-up the reduction in staff

The ASUP chairman, Prince Aromolaran Adeyemi said the decision to embark on the strike was taken at the congress held in

July. He also disclosed that the industrial action has the support of national body.

Aromolaran said when the unions kicked against the college management action, they were invited to a meeting by the rector

and she could not produce any document mandating her to deduct staff allowances.

He stressed that with the strike, his members would not be part of the forthcoming part time and full time exam stating

The SSANIP chairman, Mr. Omopariola Olorunmbe said the body has issued a 24-hours ultimatum to the college management

to refund the illicit deduction and that if by Friday, the rector did not comply, his members would join the strike on Monday.

Mr. Olatunbosun Illesanmi , NASU chairman also issued an ultimatum to the management and directed his members to stop

work if by tomorrow the refund has not been effected.

The YABATECH Public Relations Officer, Mr. Charles Oni was not on seat and his office was locked while efforts to reach him

on his two mobile lines proved abortive as it was switched off.

Benjamin Anyigor also popularly called BEN10 is a Student, Blogger, Tech Lover, SEO Expert, Programmer (Kinda Part-Time) and the Founder and CEO of BENTENBLOG. You can follow him on Instgram here.