Have you been looking for a way to gain admission without JAMB or with Low JAMB and Post-UTME Score? Has your school released admission list and your name is not there? Don’t worry, you can regain the year and gain admission into 200 level with the same people you just wrote JAMB with and was offered admission. You have finally found it. Welcome to IJMB Programme, the best way of Gaining admission without JAMB and not loose a year or a level. IJMB is a programme designed to help you get admission even when Jamb has failed you and it seems you don’t have any other hope.

This is not only the best way to get admission when you don’t have any other hope, it’s one of the easiest way to gain admission into 200 level to make it more Awesome. Are you frustrated because you had a low JAMB score or Post-UTME Score and you were not offered admission or that your chances of getting admission is very low or even Zero because of your Jamb score or Post Utme score?

If so, do you know that you can gain admission directly into 200 level with IJMB and meet those set of people you wrote Jamb with the same year who gained admission when you didn’t?

You may even ask : is that even possible? Or How can that even happen when you had a very low JAMB score?
Let me start by telling you that it’s more than 100% possible to gain admission into a very reputable University like UNILORIN, ABU, UI and many others just to mention but a few. And not only are you getting admission into those Universities, you will be gaining admission directly into 200 Level.

Do you also know that with IJMB programme, you can gain admission into any course of your choice even the popular ones like Medicine and Surgery, Engineering Courses, Pharmacy, Law, Business Administration, Mass communication just to mention but a few in a popular University or any University of your choice?

Before we proceed, what is IJMB?

Before we proceed to show you how you can do this, let’s give you a brief explanation on what IJMB Is.
“IJMB is an acronym for Interim Joint Matriculation Board which is a nine months Advanced level (A level) Federal Government Approved programme moderated by the Ahmadu Bello University, Zaria with different study centers across Nigeria. As mentioned earlier, IJMB is a federal government approved programme, which is certified by National University Commission (NUC).
With this programme, you can admission directly into 200 Level into almost any University and any course in Nigeria.”

Candidates who are interested in the IJMB programme are required to choose any three (3) O-level subjects which is mostly related to his or her course of study in either Sciences, Arts or Social Sciences.

Candidates will then be lectured on these 3 selected subjects for a time period of nine(9) month or Less than (Depending on If the candidates registers earlier or less than 9 months when the candidate registers for the programme late) at their chosen Study Centre and thereafter sit for the final examination. On successful completion of the programme, A certificate will be issued to all candidates which will then be used (IJMB Certificate) to secure admission into 200 level in any Nigerian tertiary institution by means of Direct Entry.

ADVANTAGE OF IJMB OVER JAMB.

Do you know that Gaining Admission Via IJMB is Easier when Compared to Jamb? Here are the following Advantages that IJMB has over JAMB.
1. JAMB Result Expires that Same Year while IJMB result does not Expire.
2. You can Use Your IJMB Certificate as many time as you like to apply for admission.
3. You can apply for JAMB And Still be doing IJMB which increases your chances of gaining admission.
4. You gain admission into 200 Level unlike JAMB that will put you in 100 Level.

5. Your Chances of Passing is high since You Only write Exam on the Three (3) Subjects you are Taught during lectures and not JAMB which Involves reading Almost all the Textbooks for all the Four (4) required subjects.

6. Its Easier To Spend 9 Months and Gain Admission Into 200 Level In a University rather than spending 3 years in a College of Education or 2 Years plus in a Polytechnic whereas you will still have the same chance of getting admission into 200 level through Direct entry with somebody that spent just 9 months for the IJMB Programme.

IJMB Programme is relatively very cheap compared to other Programmes like JUPEB, Pre-Degree Etc and it promises to even give you more chances of gaining admission and even graduating faster since you will be admitted into 200 Level Directly.

IJMB School Fees Through Out the Programme (9 Months) is around N130,000 to N165,000 For The Complete 9 Months (Accommodation, School Fees, Textbooks And Others Included). (You can even start lectures with Half the Payment then complete it Before the programme ends.)

The School Fees Varies depending on the Center which you will find out during registration as some centers are more expensive while some are relatively cheaper. 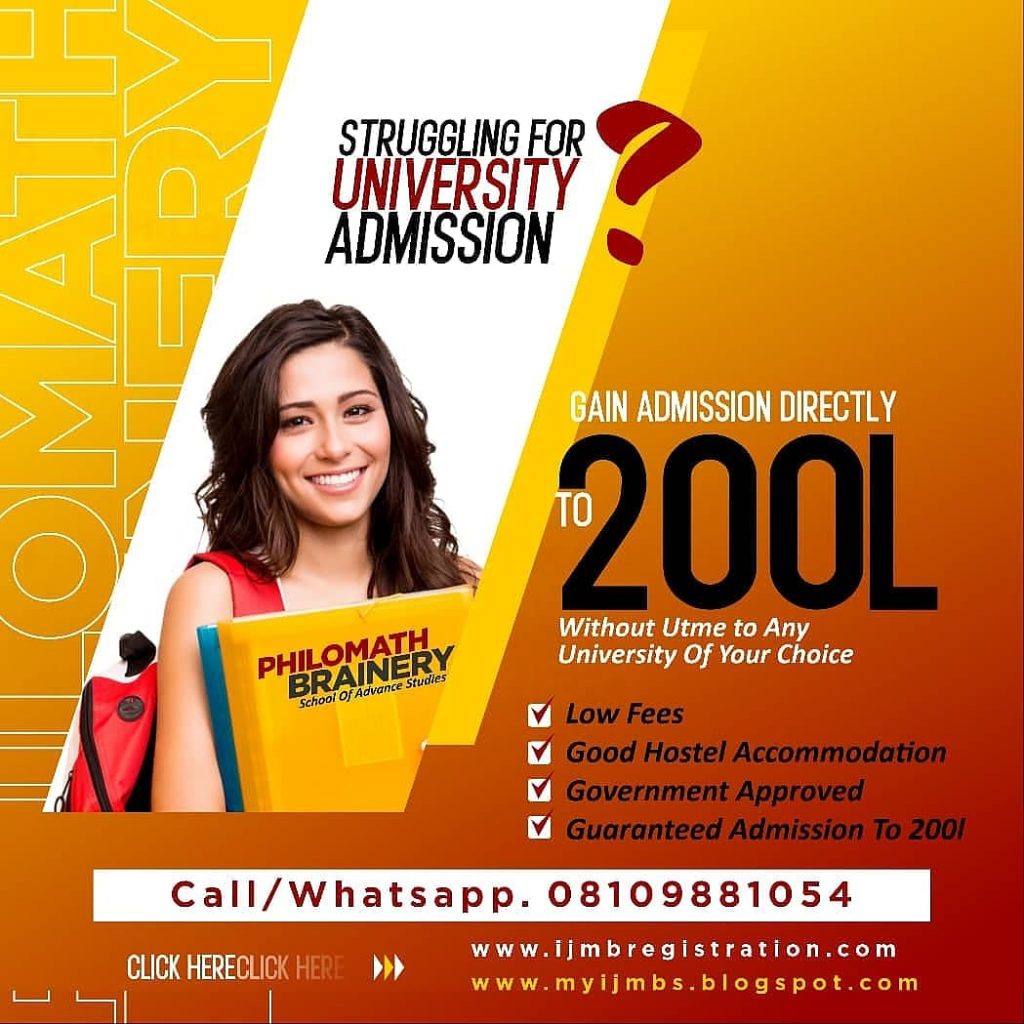 So, to avoid staying at home throughout this year and wasting another One Year, This is a very good opportunity for you to recover a year that you already wasted by starting a programme that if successful, will project you to 200 Level Direct.

During the Registration, You are required to Select the 3 most related O-Level Subjects (Apart From English Language) for the Course you intend to study in the University.

How To Apply For IJMB Programme Admission.