Home » Others » Mid-Points with its Applications and Graphical Characterization

The concept of mid-point is very common in our daily life. Actually, when we say the mid it means the half of any object. In mathematics, the term is used frequently for nth dimension geometry.

Like the mid-point of a line segment, mid-point of the diameter of a circle, mid of the polygon, and other various subjects like physics, chemistry, and geography depending on the concept of the mid-point.

In this article, we’ll learn about the definition of mid-point, geometrically concepts, and applications in daily life. 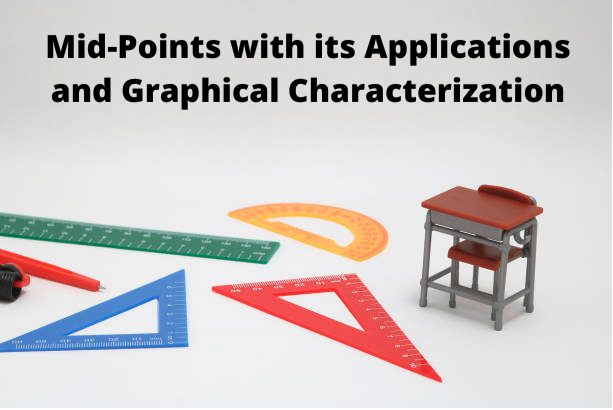 What is a Mid-Point?

The graphical view of the example is given below

The x coordinate of mid-point Z is mid of the x-coordinates of X and Y.

The y coordinate of mid-point Z is mid of the y-coordinates of X and Y.

We can also see this mid-point graphically on the Cartesian plane.

We can calculate the mid-point geometrically and analytically easily. For a quick calculation, we can use Mid Point Calculator.

Comparing the coordinates on both sides

We discuss for application in different geometrical Figures.

Its means the center of a circle lies at the origin.

The line make a 900 between the mid-point of the chord of the circle and the center of the circle. The graphical view of this is shown in the figure below.

If we have a triangle ABC and then we find the mid-points of each sides of the triangle. The point of intersection of these mid-points M1, M2, and M3 is point O. The O point is called the circumcentre of the circumcircle. We can understand this by the given diagram.

Step 1. Write the formula of mid-point.

Step 1: Write the formula of the mid-point.

Step 2: Put the given values in the formula.

Step 3: Now compare the coordinates on both sides.

Now you can find easily the mid-point of any object. You can also understand the physical meaning of the mid-point with the help of shapes and graphs. You can solve all problems of mid-points by following the above examples.