FCET Akoka resumption date for 2016/207 academic session has been announced by the management of Federal College of Education Technical Akoka. 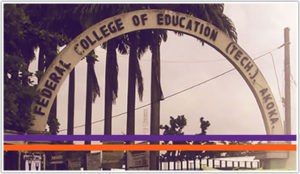 The official statement concerning that is found below:

Uniben: FCET AKOKA Application For 2016/2017 Has Been Extended

The Academic Board at its emergency meeting of Tuesday 8th November 2016 considered the report of the College Management on the students’ crisis and has directed as follows:

a. That the Federal College of Education (Technical) Akoka Students Union
Constitution should be suspended until further notice.

c. That nominated Departmental representatives should work with the College Management through the Students’ Affairs Office in the interim.

d. That the FCET Akoka Constitution should be reviewed to include conflict resolution mechanisms such as establishment of Judicial Arm and Financial Guidelines, which shall be the prelude to subsequent elections into students union offices.

e. That the College shall re-open for full academic activities on Monday, 14th November 2016 with NCE II and III commencing on-line registration for the 2016/2017 1st Semester. All returning students must sign an Undertaking to be of good behavior which must be properly endorsed by their parents/guardians.

f. Obstruction/Locking of College Gates or invasion of any facility during any protest is hereby prohibited. Students that violate this regulation shall be expelled forthwith from the College.

Students are reminded that the award of the College Certificate is made to persons who are found to be worthy in “learning and character”.